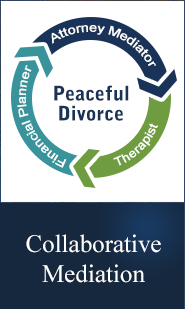 Can My Mediator Handle all of the Paperwork for Us?

Yes. Peace Talks Mediation can prepare, file, and serve all of the necessary paperwork for you for a flat fee. We have both an attorney and a paralegal on staff.
If you prefer, you have other options for filing the paperwork, including doing it yourself, hiring a paralegal or document preparation service, or hiring another lawyer to prepare the paperwork for you. Either way, the basic procedure is the same.

What Papers Does The Court Require in a Divorce or Family Law Case?

Every divorce starts with a Petition. The Petition ‘package’ is a set of papers that lists your address, the date of your marriage, the names and dates of birth of your children, an extremely basic outline of your property and whether or not you’d like spousal support, among other things. The Petition can be amended later if you change your mind about any of these items.

Do We Need to Agree Before Filing the Divorce Petition?

Does it Make a Difference Who Files the Divorce Petition?

It may make a difference to you emotionally who files the Petition, however, because the Petitioner is the person who is legally asking the Court for the divorce. For many Couples , this is an emotionally meaningful decision.

What is the Filing Fee for a Divorce?

The Court’s filing fee for the Petition in Los Angeles County is $435 payable to the “Clerk of the Superior Court”. The filing fee is different in different counties, and it changes from time to time, so double check the fee on your local court’s web site before filing your Petition.

How Does the Petition Get to the Other Person?

What Does The Other Person Do After Receiving the Divorce Petition?

In mediation, many clients decide not to bother with a response if it looks as though an agreement will be reached soon. The court’s “response” filing fee is then paid when the agreement is filed, since no Response has been filed. At Peace Talks, we encourage Clients to file a response and prepare it along with the Petition for one flat fee.

Is There a Waiting Period Before the Divorce Can be Finalized?

California has a mandatory 6 month waiting period, or “cooling off” period. This waiting period begins on the day that the Respondent signs the Notice and Acknowledgment of Receipt indicating he or she received the papers, or the day that the Respondent is served with the papers (whichever applies).
Once an agreement is reached, it can be signed and filed with the Court before the 6 month waiting period expires, and the Court will (generally) pre-approve the agreement. You won’t be officially divorced until the 6 months is over, but you can start living by your agreement while you wait for the official

Notice of Entry of Judgment to be mailed from the Court stating that you are officially divorced.

Typically, the Los Angeles Superior Court takes 3 months to review Agreements and enter them into the Court records, so most people file their agreement as soon as it’s ready rather than waiting for the 6 months to expire.

What Happens After 6 Months if We Haven’t Filed An Agreement?

Nothing happens. If no agreement is reached, the 6 month waiting period will simply pass without anything happening. If you want or need the Court to take action, it is up to you to make a request of the Court to take action. Nothing happens automatically.
If you haven’t reached an agreement, and you are no longer in mediation, you may need to file a Motion or Request for Trial Setting in Court to force the next step in your case to happen. You will probably want to speak to an attorney to find out more about this in the event that you need to take steps outside of the mediation process.

How is Child Support Set in a Divorce or Family Law Case?

California has a law which sets the child support amount based on your and your spouse’s (or other parent’s income, if you’re not married) incomes after federal taxes, state taxes, social security, and other mandatory deductions.
Peace Talks uses a court-approved computer program to calculate the guideline child support, and we can run these calculations for you in your mediation session if you wish.

How long does a divorce take?

California’s mandatory waiting period is 6 months from the date the divorce complaint is served.

How is property divided?

California is a community property state, meaning that virtually everything which accumulated during your marriage will be divided equally between the two of you, with a few exceptions.

How is custody decided?

Custody is decided based on the best interests of your children. Each case is decided on a case-by-case basis. The judge considers things like the relationship you each have with the children, which parent will encourage more education, visitation with the other parent and his or her family, and which parent has a more stable home life to offer a child.

Because the standard “best interests” is so flexible, it’s hard to know what a judge would do in the event of a trial. The other problem is that a judge will only have a few hours worth of testimony and a report prepared by the family conciliation office to use to make the decision about where your children will live and how often they will see you. That’s not much information. There’s no way the judge will know for sure if what is ordered is really in your children’s best interests. Only you and your children’s other parent know that.

If we can’t settle, can I tell the judge my story and let the judge decide?

You can always stop mediating and begin litigating. We believe that’s almost never the right solution, because of the stress and toll it takes on your and your family (not to mention the expense), but it’s always an option.

Patty DeDominic is always happy to encourage people and organizations to utilize mediation services and believes that Peace Talks mediators are taking this important skill and protocol to greater visibility. Peace Talks mediators live their mission and they encourage others to find ways to make peace in business and in life. I wish we could employ her immediately to stop almost all litigation in the USA!
Patty Dedominic, Owner, DeDominic & Associates