I have known Peace Talks and their mediators for a few years now and I'm still amazed at the company’s passion to help couples in crisis come to a peaceful resolution. The mediators’ calm demeanor and broad experience give them the tools they need to handle the most volatile of situations with delicacy and finesse. Our society needs more mediators and less adversarial attorneys.
Renee Cabourne, Investment Advisor & CSA, Cabourne & Associates 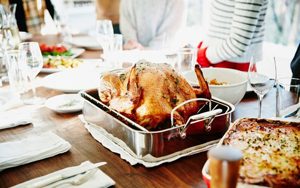 A lot of us will start booking planes, trains and medications in preparation for November 22 when we get reminded that we all were once, literally in the same boat(s), so to speak.

There have been a lot of stories about divided family gatherings back in November 2016 and now coming full circle to Thanksgiving 2018.

Of course given recent events there are reasons to believe that there will less vitriol from fewer people as most people now agree that the emperor has clothes but no clue. Still there will some differences of opinionand it will be to experience family disagreementwithout disengagement.

A friend sent me a piece from The Scientific American by Lydia Denworth that very nicely juxtaposes the atmosphere at the turkey dinnertable in 1976 with 2016. Maybe something in the piece will come in handy in avoiding discomfortor frustration before it really kicks into gear. In her words:

“Mixing family and politics has always been fraught. I know—my mother was a Democrat, my father a Republican. The night Jimmy Carter won the presidency, dad slept in the guest room. For the U.S., the bitter campaign that ushered in Pres. Donald Trump in 2016 was a lot like that of 1976 in my house. Many families were politically divided, and the calendar forced the issue: The cherished American holiday Thanksgiving came just days after the election.

Anecdotal reports suggest family feasts that year were less festive than usual, with many Americans struggling to sit across the table from relatives whom they knew had voted for a candidate they loathed. Now there is hard data showing political polarization caused quite a few people to skip the pie. A new study published this week in Science reveals families with mixed politics spent 20 to 50 minutes fewer at the table than politically like-minded groups.

Even the amount of the difference was partisan: Republicans left earlier than Democrats (some by more than an hour); Democrats were more likely not to go at all. The effect was three times stronger in areas with heavy political advertising. Overall, partisan differences cost Americans 73.6 million person-hours of family time that Thanksgiving, the study says.”