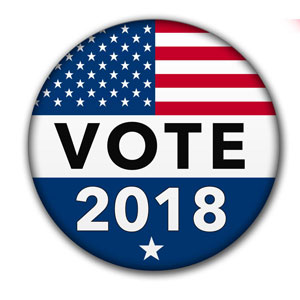 I’m encouraging everybody here at PeaceTalks and in our extended family and social circle to keep in touch on Election Day and into the night. If things go well it will be a rare chance for even divorced couples to “reach across the aisle” and show the kids what cooperation and unity of purpose can accomplish. If things go “south”then we get to experience that “misery loves company” thing.

After you’ve voted if you’d like to do something for the victims of the massacre at the Pittsburgh synagogue I’ve provided a link below along with a quote from the sponsors of the fund.

This is a brilliant example of the way that most people feel in this country and a perfect rebuke to the “fear mongering” coming from the White House. The fact that this gesture is coming from the Muslim communityproves that the spirit of this country is as alive as it always has been no matter what trumped up lies are conjured up to divide us. Let the kids see, learn and encourage one another to pay attention, vote and avoid complacency like the plague.

MUSLIMS: Let us stand with our Jewish cousins against this senseless, anti-Semitic murder. Guided by our faith, @CelebrateMercy & @MPower_Changeask you respond to evil with good. Donate here now to help shooting victims with funeral expenses and medical bills.

Hear Ye Hear Ye, but don’t believe “Ye”, as Mr. West now wants to be called by his fans, some of whom might be your kids. The untelevised pro-Trump rant, while wearing a red MAGA hat, will eventually be seen and heard and should be put into some sort of context. Whether single or co-parenting the dirty work of explainingunusual behavior by popular icons has to be done without foisting an opinion on anyone. Kids need to draw their own conclusions, and should, as long as they have factual material as an information source.

This is not about censorship. Even if you don’t agree with someone, it’s ok, as long as the disagreement is based in reality and not in “Reality TV”. Speaking of which, it will be interesting to see if Kim (Mrs. “Ye”) Kardashian, will be morebothered by being “Trumped” than she was while watching the show. Is this first celebrity Trump-related divorce in the making-who knows but is someone is designing a“Make America Grope Again” hat?

This could be a rare opportunity for some effort to go towards an actual common goal, as impossible as that can be for some separated families. We stay away from politics for very good reasons but right now our futures seem to dictate that we stay clear on what we really want for our kids, and do whatever is possible. 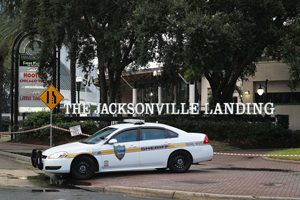 Even people that did not agree with John McCain about public policy had to admire him for his service and for having the cajones to stand up to bullies.

If your kids are video game enthusiasts and seem in any way disturbed by the tragedy in Jacksonville don’t hesitate to stop and let them talk or ask questions. You may not have enough answers and be looking for resources.  Whether you are co-parenting or not this is something that needs attention.

I came across a really clear and concise encapsulation of the “gun problem” in our country today. It might come in handy for your older kids but the younger ones will need as much attention as any and all “parental units” can provide. This is, of course, the first shooting “Live Streamed”to be seen and heard by anyone with the proper access.  How many kids were watching isn’t known yet. Here’s the link and a few facts:

“The research, compiled by the Harvard School of Public Health’s Injury Control Research Center, is pretty clear: After controlling for variables such as socioeconomic factors and other crime, places with more guns have more gun deaths. Researchers have found this to be true not just with homicides, but also with suicides (which in recent years were around 60 percent of US gun deaths), domestic violence, and even violence against police.

But as far as homicides go, people with mental illnesses are more likely to be victims, not perpetrators, of violence. And Michael Stone, a psychiatrist at Columbia University who maintains a database of mass shooters, wrote in a 2015 analysis that only 52 out of the 235 killers in the database, or about 22 percent, had mental illnesses. “The mentally ill should not bear the burden of being regarded as the ‘chief’ perpetrators of mass murder,” he concluded. Other research has backed this up.

None of that is to say that milder measures are useless. Connecticut’s law requiring handgun purchasers to first pass a background check and obtain a license, for example, was followed by a 40 percent drop in gun homicides and a 15 percent reduction in handgun suicides.”

If you’d like to contact people in the government to let them know how you feel here is a link:

In case you are trying to show your kids what’s wrong with the country, I wanted to pass along an appeal from Senator Elizabeth Warren.

“It’s unbelievable, Within just hours of unveiling my new anti-corruption legislation yesterday: Republican Congressman Duncan Hunter—one of Donald Trump’s first supporters in the House—was indicted by the Department of Justice for misusing $250,000 of campaign money for personal expenses.

There’s something that you can do right this minute to take on this corrupt machine:You can help Duncan Hunter’s Democratic opponent—Ammar Campa-Najjar—so we can kick one more corrupt politician out of office and get one seat closer to taking back the House in 2018.

Ammar worked as a grassroots organizer for President Obama’s 2012 re-election campaign and then went on to work in the White House and the Department of Labor.

Ammar has pledged not to take any corporate PAC money in his campaign for Congress, so he’s not going to be bought by corporations.”

Click here now to chip in $3—or whatever you can afford—to help defeat Duncan Hunter, elect Democrat Ammar Campa-Najjar, and end GOP control of the House this November.

Thanks for being a part of this.

I don’t need to emphasize how important this is to all of us. Anyone can write to any United Sates Senator to urge action on a matter of concern to citizens of the United States. This is one source for facilitating the contact process:

On August 26, all across the country, Americans will stand united in commitment to our freedom and our future to demand that the U.S. Senate stop Judge Brett Kavanaugh’s nomination for a lifelong appointment to the Supreme Court.

In Brett Kavanaugh, Donald Trump chose a nominee who not only has extremist, ultra-conservative legal views on a range of issues, but who has repeatedly argued that the Supreme Court should put the president above the law.

Senators in all fifty states must listen to their constituents, do their jobs to uphold the will of the people, protect the soul of our country and Constitution, and block this nomination. United, we will fight to ensure Brett Kavanaugh never gets confirmed by the Senate. We will #StopKavanaugh. Join us.

A lot of parents that I meet have expressed frustration at trying to explain certain current events to their kids that we seem powerless to stop. Inspired and energized as we all were by the Parkland Shooting survivors we still need to explore ways that enable our kids to feel connected to whatever causes they deem worthwhile.

This message from MoveOn might provide a serviceable outlet for anyone to call attention to a situation they feel needs to be addressed by as many people as possible. I’m not advocating for a group just passing along what might be a helpful opportunity.

“In May, just months after the Parkland massacre, MoveOn member Andrea Smith started a petition asking Publix, her local grocery store, to stop contributions to the campaign of an NRA-backed candidate for governor. Within a week, in response to public outrage, including the petition and inspiring student-organized protests, Publix changed its corporate policy.”

“Here’s another example: last year, MoveOn members Sandy and Lonnie Phillips used our free petition platform to help convince the Democratic National Committee to reject money from the gun, tobacco, and payday loan industries. More than 20,000 people from across the country signed on to say our politics shouldn’t be bought off by special interests―and their voices were heard.”

People took action together and made change. You can make this kind of change too.

Click here to get started right now. Starting a petition can take just a few minutes, is totally free, and can have big impact.

MoveOn’s petition platform is a resource that lets you not just start petitions but also send follow-up mailings to your petition signers and coordinate petition deliveries to decision-makers. It’s an amazing tool for anyone who wants to power progressive change.

I want to pass along a heads up on an encouraging piece by Noah Berlatsky from the LA Times. It’s been tough to focus on positive slants about the chaos we’ve seen in the headlines but there are some rallying points the article highlights for us.

“Voters are not angry at the left’s efforts to preserve healthcare, or to protest vicious policies. They’re angry at right-wing extremism, tax cuts for the wealthy, and monstrous border policies designed to separate children from their families.”

It’s nice to see movement in the right, make that correct, direction, but Berlatsky couples this with a strong warning about complacencywithout using the word. (We can’t take our foot off the gas with so much ground to make up.)

“We can’t know for sure if Democratic wins will continue. Republicans have many advantages because of gerrymandering, voter suppression, and structural biases in favor of rural voters. Democrats are by no means assured of winning the House, much less the Senate.”

Before the fireworks were lit and showing some “rockets red glare”, there were some different fireworks set off at the feet of the Statue of Liberty. 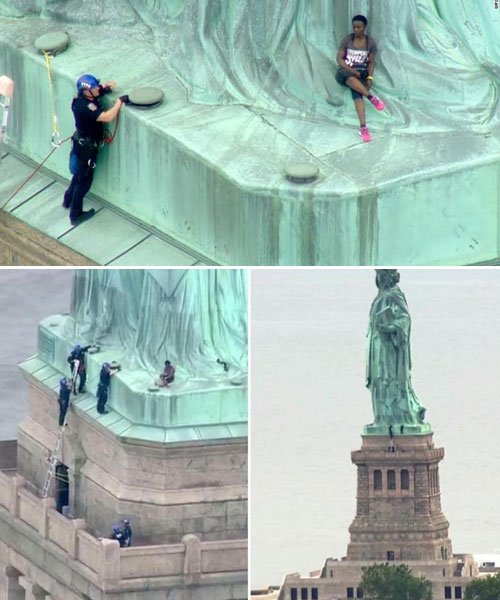 “A woman who climbed up on the Statue of Liberty and sat on the monument’s base is in detention, police say.

US officials identified her as Therese Okoumou, a 44-year-old immigrant from the Democratic Republic of Congo.

You can read the whole BBC News article using the link below but it does seem to be the perfect metaphor for America’s “struggle to climb out from under British oppression”.  I’m sure the irony of this being reported by the British media on American “Independence Day” gave a lot of people a chuckle.

This kind of inspired action may come in handy as we begin the struggle over the nomination of the next Supreme Court Justice.

Apparently, women have had enough of being on “the short end of the stick” when it comes political policy in this country.

In many places, women are running for congressional seats that have never had a female representative. Just over half of the US population is female, but 80% of the members of “The House” are men.

I’ve noticed that with our awakened youth on the march they seem to sense that having more women involved in policy decisions would be a very good and smart plan.

There are thousands of our kids that can’t vote but they are doing their damnedest to help register and actually pledge to escort travel-challenged voters to the polls.

Maybe we can offer to pay for the bus fare and the gas.