Make Mine a $Million Business

2006 Make Mine a $Million Business Award 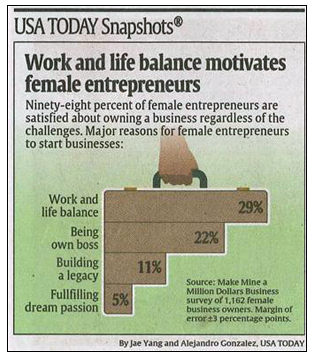 In 2005, Julie Tucker Legrand and Jennifer Elias were running low on cash for their fledgling trivia-game business. So the San Francisco entrepreneurs devised what turned out to be a winning plan.
They spent several weeks revising the business plan they had written for their company, SmartsCo., and entered the 50-page document in the Make Mine A Million $ Business competition hosted by Count Me In, a New York nonprofit that provides resources for female entrepreneurs.
Making it to the finals in Long Beach, Calif. — where they gave a three-minute pitch to judges and an audience — they took home the top prize: a $45,000 loan from Count Me In and a $10,000 credit line from American Express Co.

Business-plan competitions, long an academic ritual to help business-school students develop ideas and pitch investors, are becoming an increasingly popular way for business owners and would-be entrepreneurs to raise extra cash while honing their business strategy.
Many of the newest contests aren’t hosted by colleges, but rather by product makers and Web sites courting small-business owners and by investment firms or nonprofits trying to spur economic activity in a particular region or industry. Even the college contests, where student teams at various schools compete against each other, have become something of a sport. The competitions often entail submitting a written business plan. Contestants that pass the first round then usually compete in person by pitching their plan to a judging panel that often includes veteran entrepreneurs, venture capitalists and business professors. Some newer competitions just revolve around giving an informal pitch about a business idea, without requiring the submission of a formal plan.
The cash prizes contestants win, which can range from nothing to $100,000, are often gravy to the other benefits: free publicity, access to potential investors and having seasoned entrepreneurs and investors vet your plan. (In the newer Count Me In contests, winners also get prizes such as free laptop computers and hotel vouchers provided by the corporate sponsors.)

“You always like to win, but you’re really there for the experience,” says David Dickinson, co-founder of In Your Home, a Lake Oswego, Ore., company that helps older people adapt their homes for retirement. Mr. Dickinson and his partner were finalists in the 2006 Silicon Valley Boomer Venture Summit, a contest hosted by Santa Clara University in Santa Clara, Calif., for entrepreneurs with business plans that serve the baby-boom generation.

Even though they didn’t win the $10,000 grand prize, Mr. Dickinson says the feedback helped them fine-tune their business model and better market themselves to seniors. He expects the 13-employee company will do $1.1 million in sales this year up from $620,000 in 2006. “You don’t want to be that guy that sinks all of his money into his business to wake up one morning and realize it has no real potential.”

Ms. Tucker Legrand and Ms. Elias of SmartsCo. appeared in a multimedia ad campaign for American Express a few months after winning the Count Me In competition. They credit the media exposure resulting from the competition with helping them sign a deal with a major book distributor, Quirk Books, which in turn helped them this year get their games, such as ParisSmarts, into major retailers including Borders bookstores and kitchenware chain Sur La Table. “We had spent years knocking our heads against Borders, and then we win this, and we’re suddenly in,” says Ms. Tucker Legrand. The company is in line to do $600,000 in sales this year, almost double those in 2006.

Even at the college level, the competitions have given a big boost to the student teams that win. The number of school-based competitions has risen to more than two dozen from just a couple in the early 1990s, estimates Charles Hofer, an entrepreneurship professor at Georgia’s Kennesaw State University who coaches student teams and hosts competitions. Some schools open their competitions to alumni and faculty, though many are teams with at least one graduate student.

The school-based contests have become much like an athletic competition. Student teams often spend months preparing their plans and participating in in-school competitions to get ready. Each spring, the teams do a circuit of intercollegiate contests across the country. The Moot Corp., an international contest hosted by the University of Texas in Austin that’s held in late spring, has been dubbed “Super Bowl of business-plan competitions” where the winners from other college-based competitions face off.

Jay Mullis, a recent MBA grad from the University of Georgia who invented a roach poison, won about $63,000 in five plan competitions earlier this year, including finishing fourth in Moot Corp and winning Fortune Small Business magazine’s competition. The prize money is far less than what it will take to bring the product to market next year. But Mr. Mullis met an investor at the Moot competition with whom he is currently in negotiations to swap 25% of equity in his company for a $750,000 equity investment. “If you can go out and win the competitions, you’ll have all the [venture capitalists] banging down your door,” Mr. Mullis says.

Though business-plan competitions can offer a jolt to many businesses, they aren’t all equivalent in value. Some offer more useful feedback and publicity to the contestants and winners; others attach strings to the prize.

For instance, some competitions require relocating the business to the city where the competition is held to claim the prize money, or they require winners to accept an equity-capital investment from a particular investment firm.

“You really need to read all the fine print before entering these contests,” says Rich Sloan, co-founder of StartupNation.com LLC, a resource site for entrepreneurs.

And not everyone thinks plan competitions are worth the effort. William Bygrave, an entrepreneurship professor at Babson College in Wellesley, Mass., says the contests reward those who can make the slickest presentation rather than those whose plan can realistically be implemented.
“The problem with competitions is they become an end themselves,” he adds, “opposed to what they should be, which is a stepping stone.”

● Mediation in the News: The Williams Divorce

● Collaborative Divorce The Best Way To Divorce In California

● Things Parents Should Consider When Divorcing

● The Stages of Grief During Divorce

● Tax Filing Status: How will it change with divorce?

● Alimony – How New Tax Rules Can Affect It

● Helping You Divorce During the Coronavirus

● Overstaying In A Bad Marriage

● Divorce And Suicide – All Too Related